Seccount Service uses cookie files. Staying on this page you agree on using them. Click for more information. [X]

The changes in 2019 can only be compared with 2009. At that time, the 3-layer architecture was implemented with the new Windows client. After ten years, the then introduced Windows client is replaced by the Web client. The web client has been significantly improved and has its puberty behind it today. And more importantly - it's just the beginning. It will definitely evolve. In addition, there are many additional expansion options that we developers have in hand, such as. JavaScritpts. 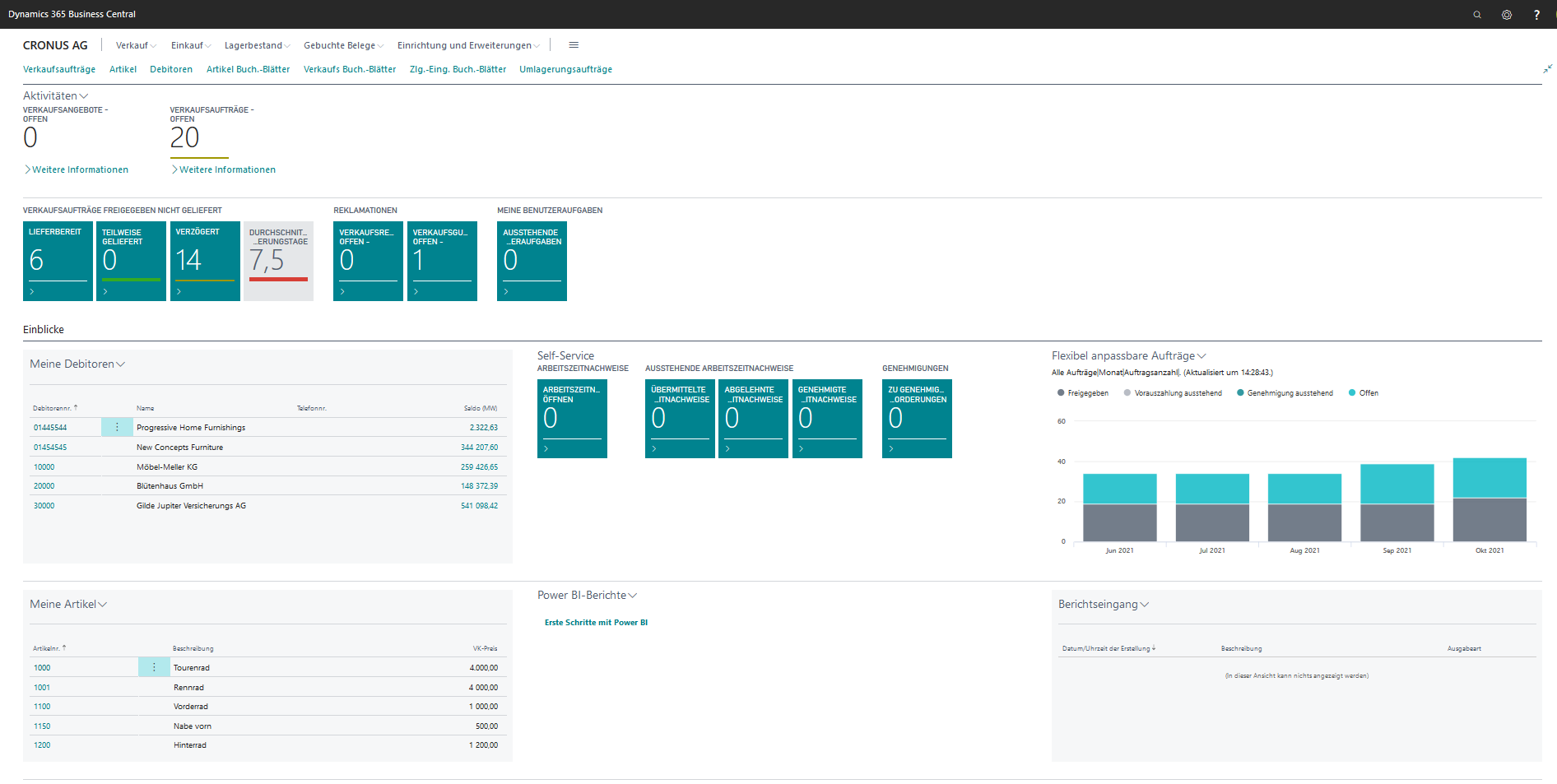 The C/SIDE development environment with the language C/AL can no longer be used from version BC-15. Almost everything is still programmable and the application can still be customized to customer needs. It just has to be done differently than before.

All changes are consistent with the Microsoft-oriented roadmap. 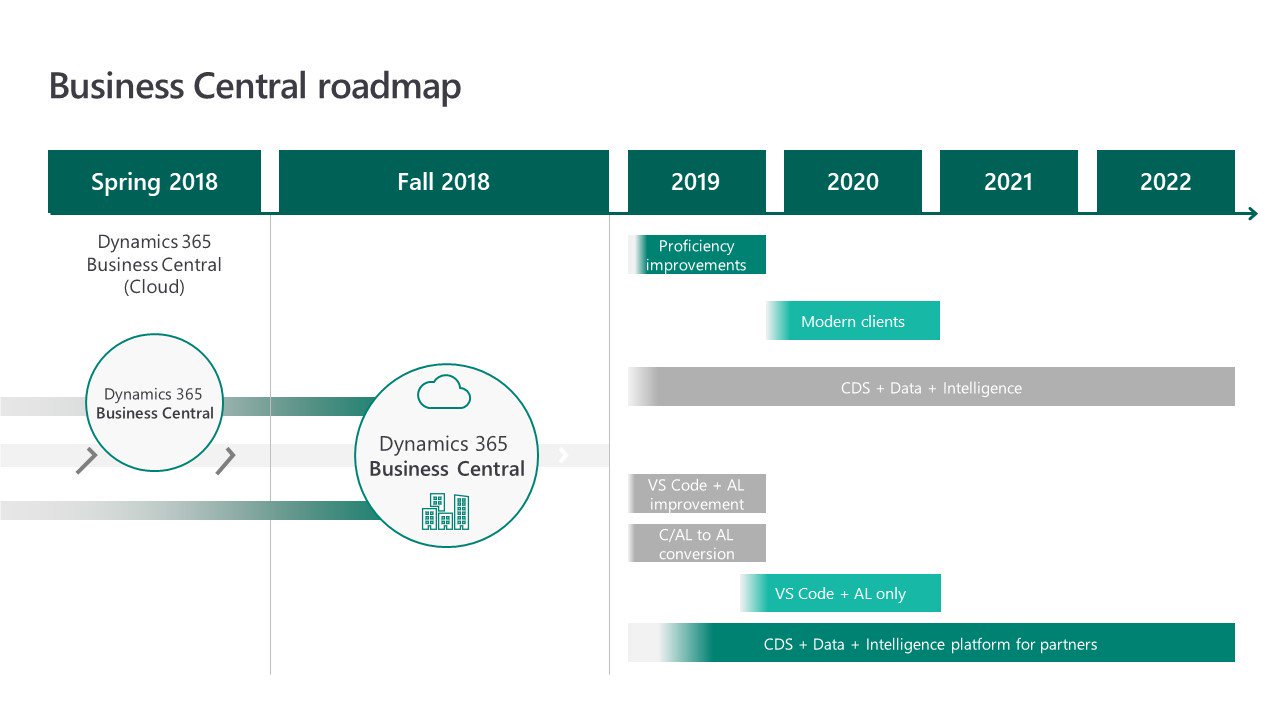 To date, the application of nearly 160,000 companies and 2.7 million users is used. It is clear from Microsoft's current roadmap that it will be a product in the future, whether it's a cloud or on premises version. The last one was renamed from Dynamics NAV to Dynamics 365 Business Central in 2018, as well as the Cloud version so far. Only at the end it is an addition 'on premises'. Dynamics NAV was the name since 2009.

The Rolencenter and the interface of the 2018 'on premises' version looks like this: 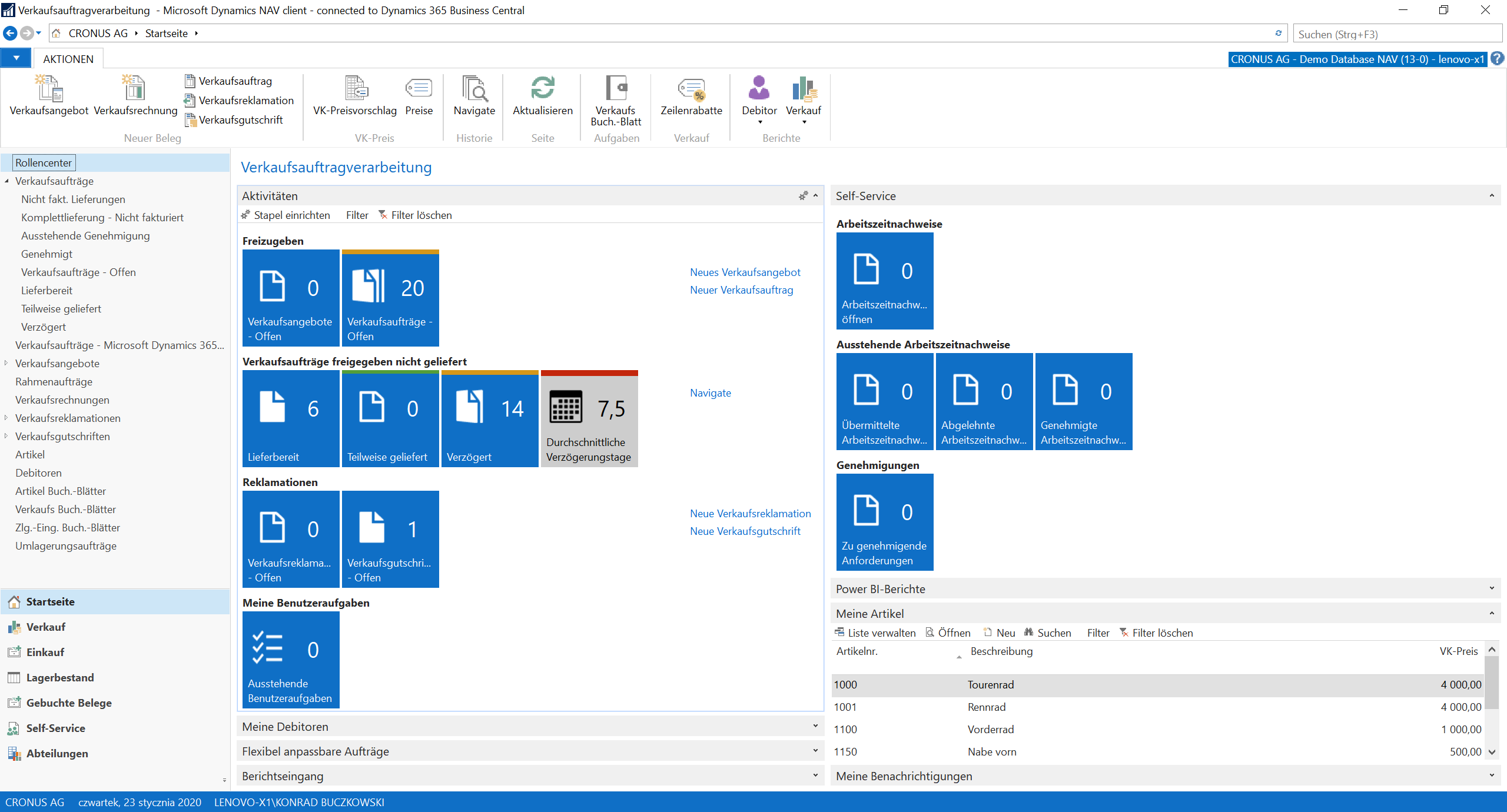 In 2013, Microsoft introduced a new version (Dynamics NAV 2013R2) with the modified interface. This customization was synchronized with the other Microsoft products, notably Office 365. So less colorful colors dominated by white and blue. The product logo has also been changed and simplified.

Since introducing the Three Tier Architecture and the Role-Tailored Client in 2008, Microsoft has experimented and perfected much the client. These versions are different from later versions with a colorful interface, especially on the Ribbon and stacking instead of tiles on activities on the Rolencenter. The 2013 version looks like this: 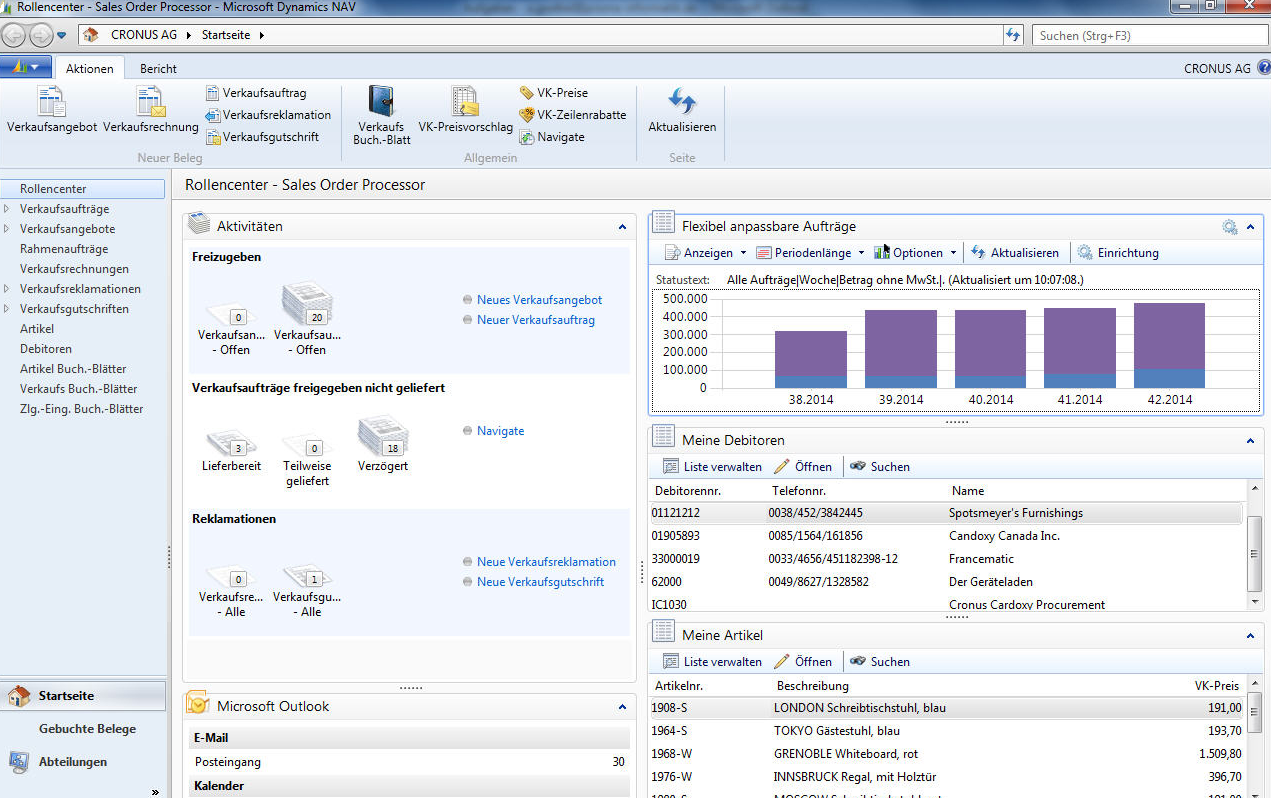 The 2009 version (earlier than 5.1 planned) has brought a lot of changes. A new middle-tier architecture was introduced. There was a new client - RTC, which differed severely from the previous client, further referred to as the Classic Client. Two clients were still available in the 2009 R2 version. (From Dynamics NAV 2013 there is only the RTC architecture). A new Visual Studio based Report Designer has also been introduced. In the sense of system migration one could say - there were two eras - before Classic Client and after the Classic Client. Migrations between new RTC versions are relatively easy.

Old version, very popular and oft used to date by many customers. Named later as the classic client, version 5.0 has also been known under the new name 'Dynamics NAV'. 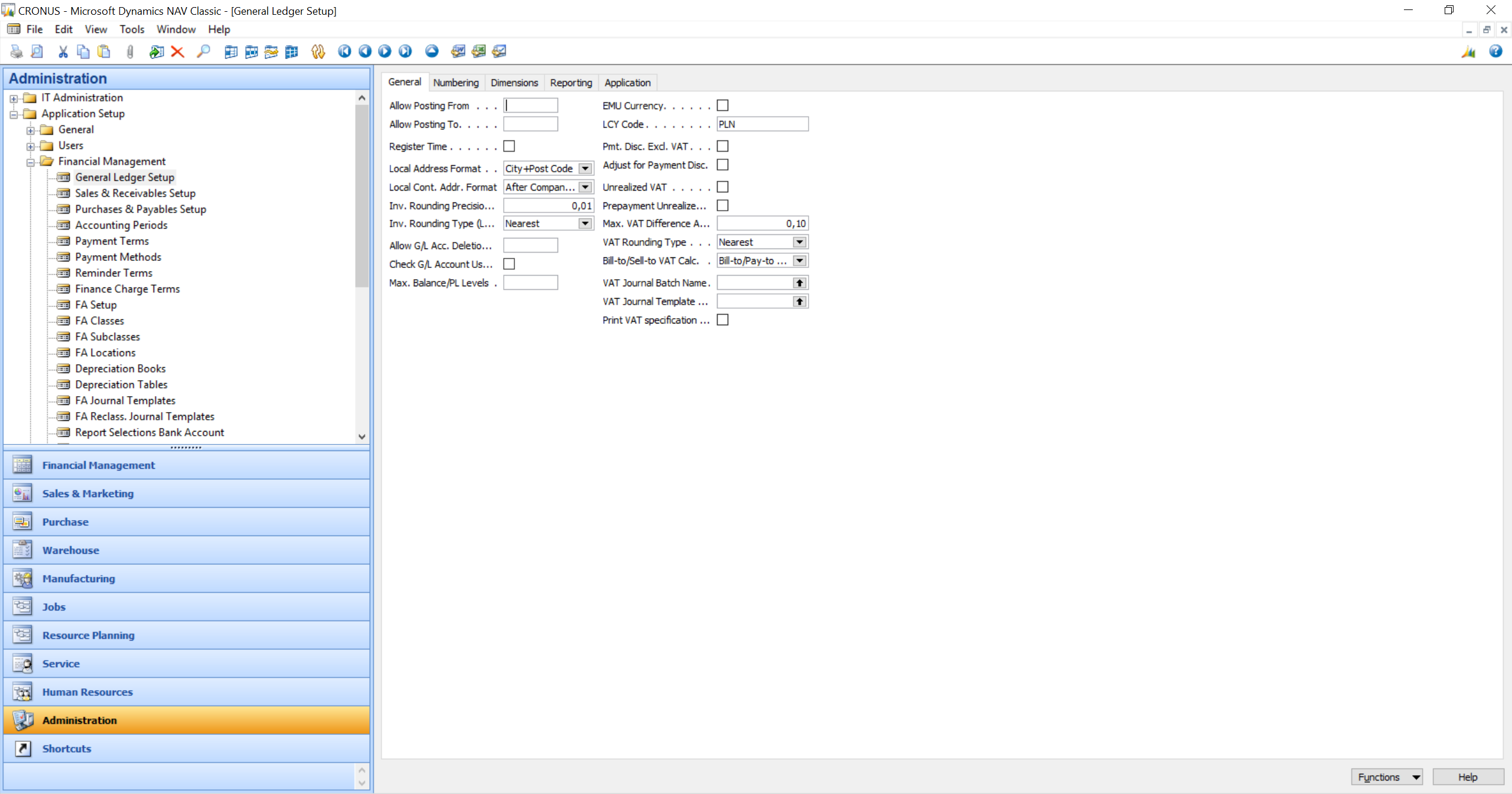 In 2002, history begins under the Microsoft logo. But the beginning of Navision ERP software was almost two decades earlier. In 1983, first steps were taken. Everything can be read here  Navision History 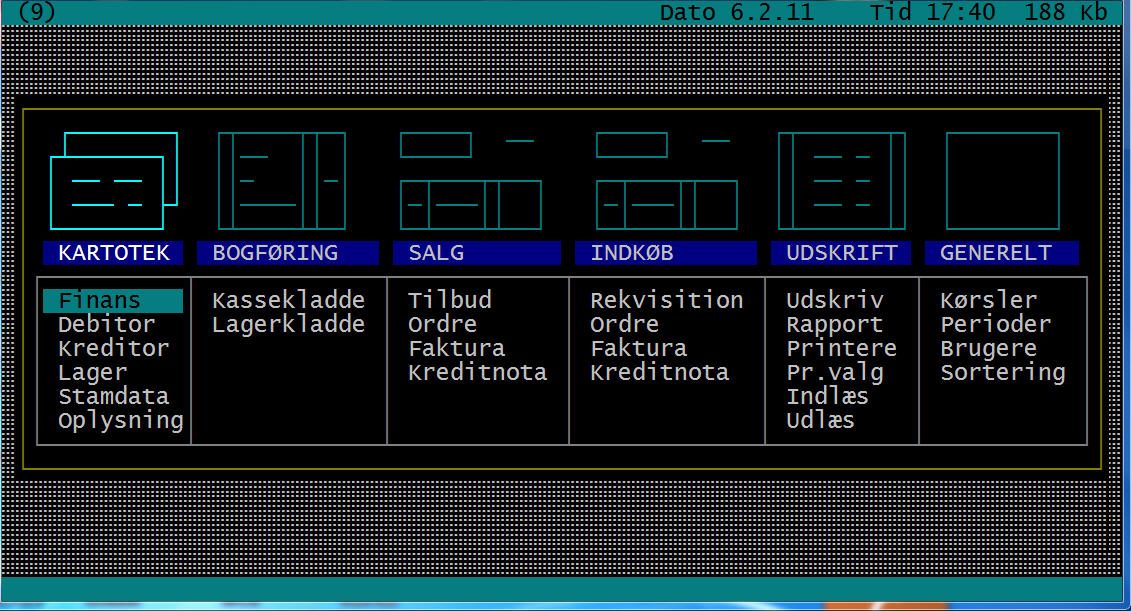 One thing one can be sure. It's a success story, that continues.

Summary of versions from Navision to Business Central